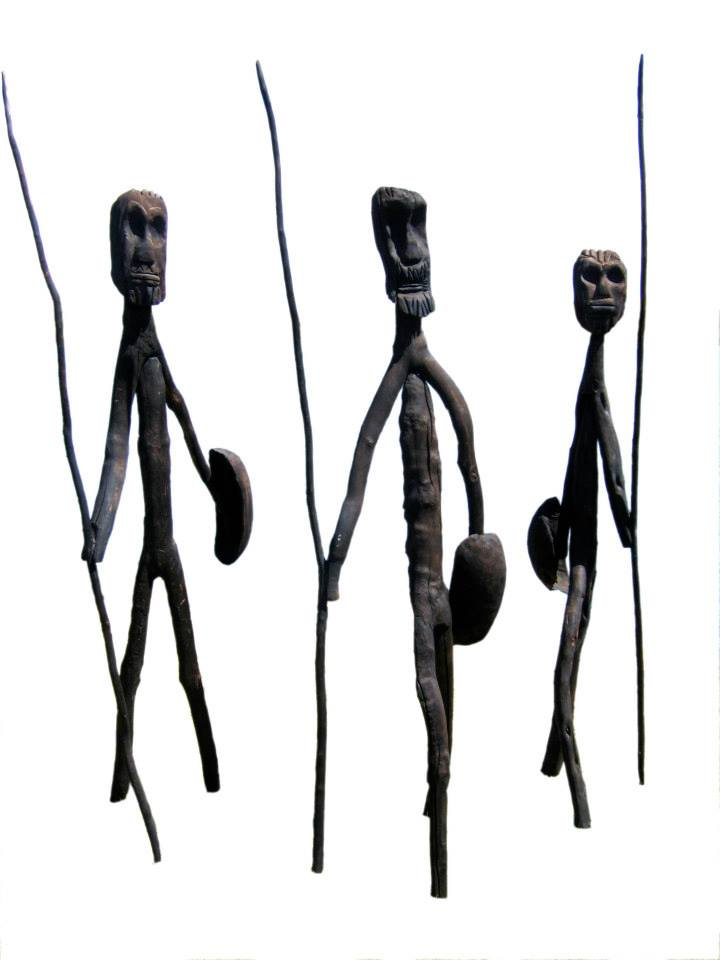 Garth Lena, a Minjungbul sculptor, was born in 1967 in Murwillumbah, northern New South Wales and spent his childhood growing up in Fingal Head with his many siblings and cousins. Lena began creating work in 2000 and in 2001 he completed a course of Aboriginal Arts and Cultural Practice at Kingscliff TAFE. He continued his studies with a Certificate IV in Fine Art in 2002 and with a Certificate III in Ceramics in 2003 both at Murwillumbah TAFE.

Lena’s sculptural pieces incorporate local Dreaming Stories of the Minjungbul and Bundjalung Indigenous people of Northern NSW and are created from wood, clay, steel and local bark. Although Lena has only been practicing as an artist since 2000 his work has already been recognised at a State level. His work is in the permanent collections of the NSW Premiers Department, Tweed River Art Gallery, the Tweed Shire Council and the NSW Parliament House Art Collection. His work is also held in many private collections including that of Doug and Margot Anthony.

In 2004 Lena was awarded First Prize in the open category of the National Parks and Wildlife Service’s Aboriginal Art Award “Celebrating Wisdom” with his work Spirit Man. Lena also won first prize in the 3D category of the 2005 and 2006 National Parks and Wildlife Service’s Aboriginal Art Award exhibitions, “Living Culture” and “Our Spirit, Our Country” with his respective works withMan Goes and Boogaban (eagle hawk). In 2006 Lena also won the Aquisition Award at the Casuarina Sculptural Walk in Casuarina, NSW with his work Two Brothers, as well as the prestigious NSW Parliament House Indigenous Art Prize for his sculpture, Black Dog and Spirit Man.

Lena has exhibited his work both locally, in group shows including “Corroborate” in 2004 and “Three Brothers” in 2005 at the Tweed River Art Gallery and nationally, when in 2005 he was selected for inclusion in the Telstra National Aboriginal and Torres Strait Islander Art Award at the Museum and Art Gallery of the Northern Territory in Darwin. Lena stated in an interview with the author that his inspiration comes from “the great history of Black People” and his love of the past that he says “is strong so that we can have a good future”.